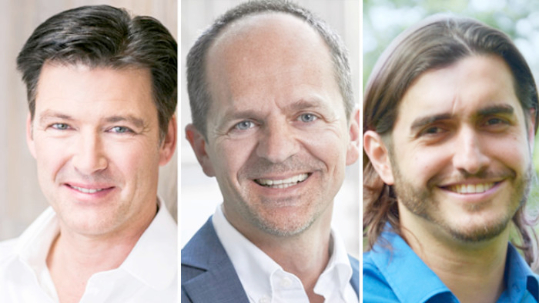 For a patient-specific and anatomical reconstruction of the knee, patient anatomy, preoperative planning, intraoperative alignment and the implant design must be considered together. This was the conclusion reached by the speakers at the ARTIQO Symposium “Personalized Alignment in Knee Prosthetics – Theory und Praxis” at the Berlin Endoprosthetics Congress on February 25, 2021, chaired by Henrik Schroeder-Boersch, Wiesbaden. 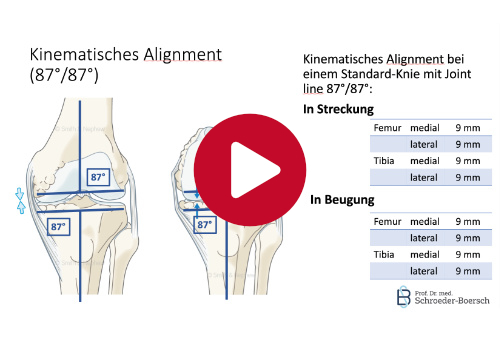 In his presentation “Why treat TKA patients individually?” (Prof. Dr. H. Schroeder-Boersch / Why treat knee TEP patients individually?) explained Prof. Dr. Henrik Schroeder-Boersch, Wiesbaden, based on the anatomy, why the mechanical 90/90 degree prosthesis positioning of the last decades is a thing of the past and why the knee should be anatomically reconstructed instead.
Anatomically, every knee is different. According to Schroeder-Boersch, with the aim of an anatomical reconstruction, the natural joint line automatically comes into focus. The tibial surface is seldom perpendicular to the mechanical axis, but is often tilted medially by about 2-3 degrees. Correspondingly, the distal surface of the femur also inclines medially. A “standard” knee therefore often has a lateral distal femoral angle of 87 degrees and a medial proximal tibial angle of 87 degrees. In addition, the leg axes were taken into account: “A reconstruction of the joint line also means that we achieve the rotation around the correct axis,” stated Schroeder-Boersch. If this is not successful, the ligament tension changes over the entire range of motion.

Schroeder-Boersch showed how often a medially inclined joint angle occurs in patients based on the evaluation of preoperative anatomical CT data of 143 patients, which the company ARTIQO had carried out in the course of the development of the 4-motion® knee prosthesis. About two thirds of the patients (n=92) had a varicose tibia inclination between 80.5 and 87.9 degrees. A smaller group (n=25) still had a slight varus between 88 and 89.5 degrees, while the final sixth (n=26) had a neutral or somewhat valgus axis between 89.6 and 93.2 degrees.

The most exact alignment possible is a success factor for KTEP

What conclusions can be drawn from this for the right alignment? After all, an alignment that is as exact as possible is considered an important success factor for the long-term outcome after implantation of a TKA, while an inadequate alignment can lead to poor function, a shorter service life or loosening of the implant.

Johan Bellemans shook the gold standard of mechanical alignment in 2012. He found that approximately every fourth knee joint is in a constitutional varus position after growth is complete. Bellemans preferred undercorrection of the varus to neutral alignment in these patients. If you want to leave the knee in a residual varus, explained Schroeder-Boersch, the tibia is resected at 90 degrees, while the medial femur is slightly overresected.

Finally, two years later, Howell described the kinematic alignment, which – unlike the classic method – takes into account the actual cartilage and bone loss and reconstructs the original bone position in three dimensions. Schroeder-Boersch formulated the problem that with a rotational alignment parallel to the condyle line, the femoral component rotates more internally in relation to the patella. In order to prevent the pressure on the patella bearing, the femoral bearing of the implant must be adjusted.

A recently published meta-analysis certifies better results for kinematic alignment than for mechanical alignment. The eleven randomized controlled trials that met the inclusion criteria included 1,103 patients. Alignment was kinematic in 553 patients and mechanical in 550 patients. The follow-up period was mostly between 6-24 months. The WOMAC score (599 patients) was significantly better in the kinematic group with 10 points (p<0.001), as was the combined Knee Society Score (KSS) with 18 points (p<0.001). The KOOS score, which measures symptoms, pain, activities of daily living, exercise, and quality of life (291 patients), was not significantly different between the two groups, while flexion (ROM) was slightly better in the kinematic group at 5 degrees than in the comparison group.

The 4-motion® knee system: For a personalized anatomical alignment 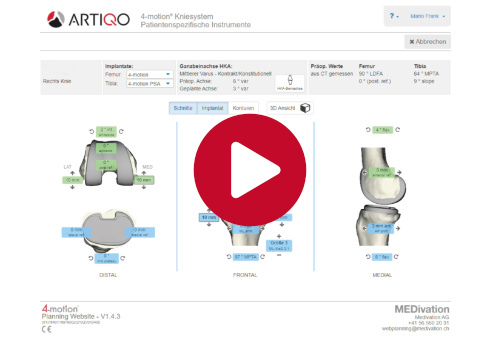 The 4-motion® system approaches the anatomical alignment in three system areas, as Mario Frank, member of the management and developer of ARTIQO GmbH, explained in his presentation ( M. Frank / Implementation of personalized alignment with the 4-motion® knee): The system features three-dimensional preoperative planning, patient-specific cutting blocks and implant components that are designed and approved for variable and anatomical alignment.

Based on this data, the surgeon receives a precise three-dimensional CAD model of the pathologically changed patient’s knee about a week later, as well as a detailed, preoperative suggestion that he can interactively check and change on the computer.

The proposal follows a special planning algorithm that takes into account the patient’s individual anatomy. According to Frank, the positioning variability is achieved through three degrees of freedom: The reconstruction of the femoral joint line enables an LFDA of 87-90 degrees and for the tibial joint line an MPTA of 87-90 degrees. The mechanical axis reconstruction ranges from 3-0 degrees. The aim is to avoid or minimize overresections and loss of offset or asymmetrical thickening caused by the prosthesis.

After the surgeon has approved the planning, the patient-specific cutting blocks are produced for the operational implementation of the highly precise three-dimensional plan. Another special feature of the system is that the 4-motion® implant components were designed and approved for anatomical reconstruction. “This makes them special compared to conventional implants, as variability in component positioning (LDFA and MPTA spectrum of 90-87 degrees each) is possible for anatomical reconstruction of the joint line,” emphasized Frank.

The round PSA tibial keel for a variable tibial position 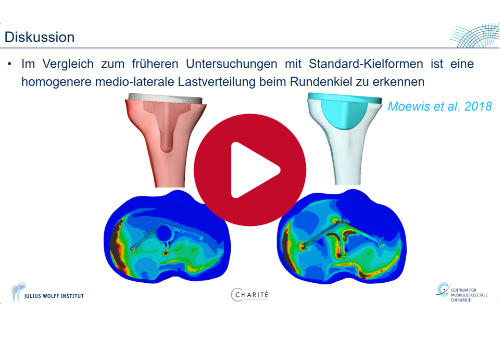 A variable tibia position of up to 87 degrees: Can’t biomechanical overloading of the bone bearing occur here? After all, a homogeneous mediolateral force distribution influences the lifespan of the implant. The ARTIQO developers of the 4-motion® system have also dealt with this in detail. The result: a tibial component with a round tibial keel for patient-specific alignment (PSA). Dr.-Ing. Philipp Moewis from the Julius Wolff Institute for Biomechanics and Musculoskeletal Regeneration at the Charité Universitätsmedizin Berlin (Dr. Ing. P. Moewis / Variable tibia position? An FEM analysis) in his lecture.

Using a finite element analysis, Moewis verified how the orientation of the PSA tibial component affects proximal bony stress. With this method, the implant component is mathematically divided into the smallest sub-areas (“finite elements”) (wikipedia.org /wiki/discretization) so that their physical response to forces and loads can be calculated. The physical behavior of the entire implant component results from the loads and reactions at the interface between the smallest elements.

Homogeneous application of force even at a 3 degree incline

Moewis compared the loading of the PSA tibial component on the tibia between a mechanical alignment (90 degrees) and an anatomical alignment (87 degrees), with normal and with 5 degrees of internal and external malrotation, respectively.

The PSA tibial keel showed a homogeneous mediolateral force distribution with both mechanical and anatomical alignment. Even with malrotation, the stress on the tibia bone is within the physiological range. Compared to previous studies with standard keel shapes, a more homogeneous mediolateral load distribution can be seen with the PSA tibial component, concluded Moewis.

The 4-motion® knee system in clinical use 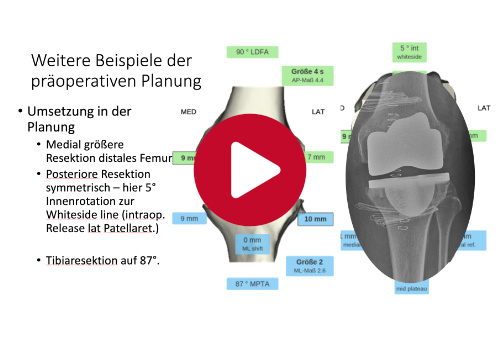 The final lecture by Schroeder-Boersch (Prof. Dr. H. Schroeder-Boersch / first clinical data / case studies) about the clinical application of the 4-motion® system. Using a few cases, he showed the workflow from preoperative planning to the result in the postoperative X-ray control. His conclusion: The preoperative tibial inclinations could be consistently restored, and this in both 87 degrees and 90 degrees, depending on the individual initial situation of the patient and with the same set of instruments.